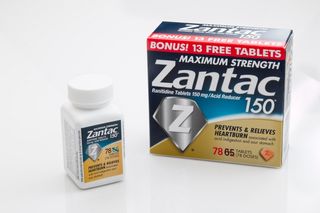 U.S.health officials have found low levels of a potentially cancer-causing chemical in a popularheartburn drug.

On Friday (Sept.13), the U.S.Food and Drug Administration (FDA) announced that samples ofranitidine— known by the brand name Zantac — were found to contain a contaminant called N-nitrosodimethylamine (NDMA).That's the same chemical that was found inheart and blood pressure medications last year, sparking numerous recalls of those affected drugs.

NDMA is classified as a "probable human carcinogen" because it has been found to cause cancer in animal studies.The chemical forms as a byproduct of certain industrial processes, and it was formerly used in the production of rocket fuel, according to theU.S.Environmental Protection Agency.It is found in low levels in drinking water and some foods, including certain meat and dairy products.

Right now, the FDA is not recommending any recalls of ranitidine, nor is the agency telling consumers to stop taking the drug.The FDA is investigating whether the low levels of NDMA found in the drug pose a health risk to patients.

"Although NDMA may cause harm in large amounts, the levels the FDA is finding in ranitidine from preliminary tests barely exceed amounts you might expect to find in common foods," Dr.Janet Woodcock, director of the FDA's Center for Drug Evaluation and Research,said in a statement.

Individuals taking prescription versions of ranitidine who want to stop using the drug should talk with their health care provider first, the FDA said.And people taking over-the-counter (OTC) versions of ranitidine could consider using a different OTC drug for their condition, as there are multiple drugs approved for the same or similar uses, the agency noted.