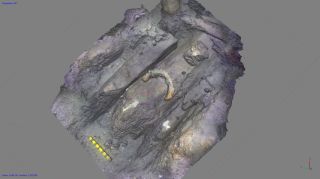 A 3D model of wooden hull frames from the shipwreck.Investigators aren't sure yet if this is the wreck of the Endeavour, later renamed the Lord Sandwich
(Image: © James Hunter/Copyright RIMAP 2019)

One of the most famous science research ships in history — the Endeavour, commanded by Lieut.James Cookon his first voyage around the world — is now thought to lie at the bottom of Newport Harbor in Rhode Island.But it could still be months or even years before the shipwreck can be positively identified.

Maritime archaeologists have spent decades hunting down the ship, which was scuttled by the British in Newport Harbor in 1778, in an effort to block French ships during the American War of Independence.

Principal investigator Kathy Abbass, of the Rhode Island Marine Archaeology Project (RIMAP), said the positive identification of the wreck would probably depend on several things, rather than a single archaeological find.

"We do not think we are going to find something that says 'Captain Cook slept here' — that is not likely," Abbass told Live Science."But if we find some of the smaller stuff that is consistent with how we know she was used — as a transport and as a prison ship in Newport, then we know we have got her."

Samples of wood from the keel of the shipwreck in Newport Harbor, taken during underwater excavations over the last three weeks, are now being sent to a laboratory for testing.The results expected later this year could show that elm wood was used in its construction — another indicator that it could be Cook's Endeavour, which is thought to have an elm keel.

"Everything we see this year is consistent with it being the Endeavour, and we have seen nothing that says it can't be," Abbass said.

Royal Navy Lieutenant, later Captain, t.James Cook commanded the Endeavour, a former coal carrier, on his first voyage around the world from 1768 to 1771.Its first scientific mission brought the ship to Tahiti in 1769, for Cook and crew to observe a transit of the planet Venus across the sun — an astronomical event that was also being recorded by other observers around the world.

Cook and the Endeavour then explored the South Pacific and mapped the coast of New Zealand, before making the first European landing in Australia, at Botany Bay in 1770.

While Cook concentrated on navigation and mapping, the expedition's naturalist, Joseph Banks, and eight other scientists recorded hundreds of unknown plant and animal species, including the first sighting by Europeans of a "kanguru."

After its return to England, the Royal Navy sold the Endeavour, deeming it unfit for further service.It was renamed the Lord Sandwich and used in 1776 to ferry British troops to fight inthe American War of Independence.

The British also used it as a prison ship off Newport during the war, and in 1778 it was one of at least 13 ships scuttled by the British in Newport Harbor to prevent an invasion by French warships — France was then an ally of the American revolutionaries.

Abbass said that RIMAP investigators first detected the wreck in 1993, when it was identified as one of the ships scuttled by the British.But they learned by 1999 that the ship in the scuttled fleet called the Lord Sandwich had previously been Cook's Endeavour,according to RIMAP.

The search had proceeded slowly, due to the difficulty identifying the many shipwrecks detected in Newport Harbor, and because of limited funds.But the investigators are now more sure than ever that they had found the right shipwreck, she said.

For many years, a different shipwreck at Newport was thought to be that of Cook's Endeavor — that of a ship named La Liberté, which had rotted beside the shore for many years, Abbass said.

Wood recovered from that shipwreck toured the world as pieces of the Endeavour — a small piece even flew on theApollo 15 moon missionin 1971, when the command module was named after Cook's ship.

La Liberté, some historians now think, had formerly been the HMS Resolution, Cook's flagship during his second round-the-world voyage from 1772 to 1775, Abbass said.

That could mean that two of Cook's four round-the-world ships ended up at Newport, within a few miles of each other, she said.

Therecent underwater excavations通过从RIMAP潜水员,澳大利亚国立玛丽time Museum and the Australian nonprofit Silentworld Foundation have recovered hundreds of artifacts from the wreck now thought to be the Endeavour and Lord Sandwich, including wood fragments, bits of leather, textiles, glass, ceramics, gun flints and ballast stones.

RIMAP divers will try to make further dives to the wreck over winter, when the waters of Newport Harbor have better visibility, and then they hope to resume excavations next summer.

Abbass said archaeologists were focusing on the construction of wreck's wooden hull and traces of its later uses in the hope of confirming its identity as Cook's Endeavour.

"We can be excited about the fact that things look promising," she said, "[but] we are not saying yet that it is her, it just looks very likely that it could be," she said.