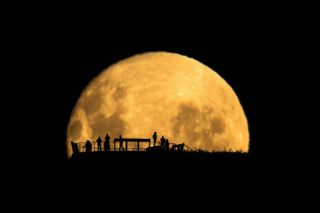 It's been almost 50 years since a human first set foot on the moon.Since then, our knowledge about Earth's closest neighbor has improved by leaps and bounds, and our obsession with it has never waned.Witness some of the most amazing images of the moon ever recorded and be reminded of the significant influence of our moon in BBC America's new documentary "Wonders of the Moon," premiering Friday, July 19 at 10 p.m.EDT/9 p.m.CDT.As the world begins its commemoration of the awe-inspiring first walk on the lunar surface, let's review five of the most recent and fascinating scientific findings about the moon.

1.There is water on the moon, and it jumps around.

In 2009, data fromNASA's Lunar Reconnaissance Orbiter(LRO) led to the discovery ofwater on the moon locked up in ice.A recent upgrade to the orbiter, called the Lyman Alpha Mapping Project (LAMP), has allowed scientists to take a closer look at the water on the lunar surface.LAMP has revealed that water molecules move around the moon as the lunar surface warms and cools throughout the day.

Water remains stuck on the moon's surface until the lunar midday, when some of the water melts and heats up enough to lift into the moon's delicate atmosphere.The water floats around a bit until it reaches an area cool enough to make it settle back down to the surface.

Water on other planetary bodies could be a valuable resource for human explorers to not only drink but also to serve as fuel for future robotic exploration, since water can be split toform rocket fuel, saving missions from having to carry that fuel from Earth.[Read more about how water hops around the moon.]

2.There's an enormous, dense blob of metal below the surface of the moon's south pole.

Deep below the moon'sSouth Pole-Aitken basin(the largest preserved impact crater anywhere in the solar system), researchers have detected a gargantuan "anomaly" of heavy metal lodged in the mantle that is apparently altering the moon's gravitational field.

According to a study of the mysterious blob, published April 5 in the journalGeophysical Research Letters, the anomaly likely weighs somewhere in the neighborhood of 2.4 quadrillion tons (2.18 quintillion kilograms).The researchers aren't sure how this giant blob of metal got itself trapped below the lunar surface.Simulations suggest it could be the heavy remnants of theiron-nickel asteroidthat crashed into the far side of the moon and created the giant South Pole-Aitken crater some 4 billion years ago.[Read more about the massive blob beneath the moon.]

3.The moon is shrinking and quaking.

The moon is shrinking.And as the crust of our lone satellite contracts, it tugs on cliff-like cracks on the surface, leading to lots of moonquakes, researchers have discovered.

Scientists revisited moonquake data gathered from 1969 to 1977 by seismic equipment on the Apollo lunar missions.They mapped the seismic data to satellite images of thrust faults, or scarps — stairstep cliffs on the lunar surface.These formations stand dozens of feet high and extend for miles, and they are visible in images captured by NASA'sLunar Reconnaissance Orbiter.The researchers discovered that around 25% of the moonquakes were likely generated by released energy from these faults, rather than by asteroid impacts or activity deep inside the moon.

Scarps are spread across the face of the moon in a vast, global network, and are estimated to be no more than 50 million years old, the researchers wrote.The age and distribution of the scarps hint that they appeared as the moon's interior cooled down, causing its crust to contract.[Read more about the moonquakes]

4.You won't strike it rich on the moon.

Gold, platinum and other metals known as highly siderophile ("iron-loving") elements are far more abundant in Earth's crust than they are in its natural satellite.That may seem odd, given the two worlds' shared history.

About 4.5 billion years ago, a Mars-size planet dubbed Theiaslammed into the proto-Earth, blasting huge amounts of material from both bodies into space.Some of this liberated stuff was incorporated into the bruised and battered Earth, and some coalesced to form the moon.But highly siderophile elements (HSEs) appear to have been left out of the mix.These metals were likely delivered by later asteroid strikes — but why does Earth have so much more than the moon?

研究人员怀疑月球的弱草vitational pull means material delivered via impact isn't as likely to have stayed on the moon as it did on Earth — lots of stuff that hits the moon returns to space.The small concentration of HSEs retained on the moon likely arrived before the moon's magma ocean cooled and solidified, so the material became incorporated into the moon's core.[Read more about why Earth has way more gold than the moon.]

5.The moon is two-faced (probably because of a massive asteroid).

Ours is a moon with two faces: the nearside boasts a thinner and smoother crust, while thefarside crustis thicker and dotted by impact craters left nearly undisturbed by lava flows.

The discrepancies have vexed scientists for decades, and in a new paper, researchers use models to explore what may be possible explanations for the stark differences.They argue that those distinctive sides could be the result ofa giant impactor slamming into the moonand leaving a massive crater across the entire nearside.[Read more about what created the moon's two faces.]

Discover more fascinating facts about the moon with BBC America's "Wonders of the Moon," premiering Friday, July 19 at 10 p.m.EDT/9 p.m.CDT.

Stay up to date on the coronavirus outbreak by signing up to our newsletter today.